The 88-92 2.2L Ford Probe, Mazda 626, and MX-6 all have the same cylinder block (F2) and crankshaft as the 87-93 B2200. These cars all have 12 valve cylinder heads. So the 12v F2 engine has a lot of interchangeable parts with the B2200. Because of this the crank pulley is interchangeable. Unless you are really good at mechanical modifications It only recommend this mod for trucks with manual steering and without A/C. If someone has done this mod with A/C or PS options please let us know, Write an article? This engine is also not for the B2000 since it has an FE block and not an F2. Not much research into the FE but parts from the other FE engines like in the Miata may work.

Parts you will need

The upper bracket that mounts to the engine will fit but should not be needed, it is also integrated with the engine mount on the car which will make it difficult to change the timing belt when you need to.

This modification also eliminates the pulley for the fan so you will need an electric fan.

All of these parts are bolt-on, once you know where to look and what parts you need everything else is common sense, although there are one or two places where you can improve by making some mods.

The hardest part is getting all the parts off the car. The 12v F2 engine compartments are very compact, if you can't get underneath the car you might have to dismantle the entire passenger side of the engine compartment.

When you get everything installed you should only have one short pulley going to the alternator. The fan pulley will no longer be used and you will have a belt tensioner to make changing belts a bit easier. This will all remove about 6lbs 15oz off what the crank has to turn. This does not include eliminated wind resistance from the fan, friction from the pulleys or the weight of the alternator armature. 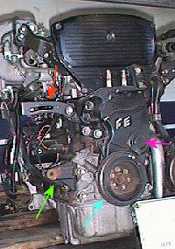 The arrow in red points to the belt tensioner and upper alternator bracket, green the lower alt bracket, turquoise the crank pulley and pink the lower timing cover. 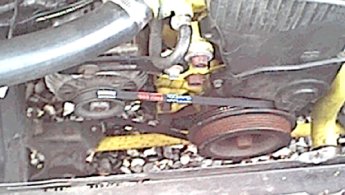 If you want to take off some dead weight you can make a bracket to remove the fan pulley all together. Here is made you can also see it in the pic above: 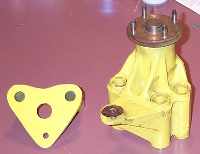 * is an estimate since it cannot be removed from the bracket to be weighed.

Doing this kills two birds with one stone, not only are you removing a little over 11.5 pounds in dead weight, you are also removing almost 7 lbs in rotational weight which is what really gives you the power. Some people may be concerned with harmonics, since both the 12v and 8v pulleys are used on the same crank and are both designed from the factory to work out the harmonics of the crank this does not reduce reliability or life out of your crank like and aluminum underdrive pulley would. This modification will also increase your upper end rpm and gas mileage since there is less resistance on the crank.