This how to change the wiring on your SR20 S14 intake to plug and play into the stock Kia Sportage main loom.

The SR20 S14 Subloom has it's own connector with wiring for the injectors, coolant temp sensor(for the dash) and coolant temp(for the ecu). 3 wires on this loom we don't use, tape them inside when you cut off the old connector.

Kia FE3 Subloom has a 6 pin plug that only has 5 wires in it, this loom is only for the injectors. The other plug is for your sensors, you need to reuse this part of your sub loom.

Pay attention to 3 & 4, the stock loom wires are very similar.

Back of the stock Kia Plug 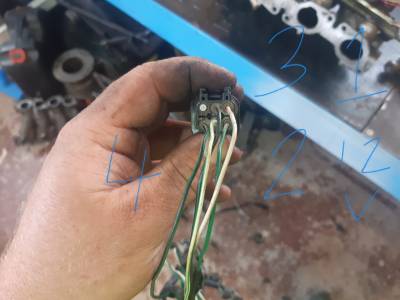 So first start off by cutting off the plug from your stock Injector loom about 80mm from the plug. Then unpick the insulation from the remainder of the Loom and remove the now disconnected wiring for the injectors. You may also want to relocate the plug for the IAC at this point, as it can be mounted with an adapter to use the stock SR20 location. Tape up the remaining of your stock Loom and route it along side the SR20 injector loom.

Now you can cut the plug off the SR20 loom as close to the plug as possible. Wire up as per the above section and then finish wrapping the new loom in tape.

Your completed loom should plug into your main harness, given that the stock SR20 s14 injectors are a similar flow rate and are also high impedance. Theoretically should plug and play to your stock ecu, and after a drive should adjust its fuel trim to suit the new injectors.

Written and Photographed by @Lynxdragon